There are countless questions running through my mind regarding autographed memorabilia. My first thought about the topic of autographed memorabilia is “How did a child’s game of collecting tobacco baseball cards turn into a multi- billion dollar industry?” That question alone deserves an entirely separate blog post (which we will do in the future), but it does give a better idea of why a topic such as determining if a signature is real or fake is important to know.

Rule 1:  Does the item come with a certificate of authenticity?

Many items nowadays do come with a certificate of authenticity (COA), HOWEVER, COAs can be easily made and wind up being just as fake as the signature it’s claiming to be real.  For that reason and more is exactly why, Optimal Fundraising Group (OFG), always provides/sells autographed memorabilia that includes COAs issued by trusted third-party grading and authentication companies.

Many athletes/celebs legally agree to autograph items exclusively with one particular memorabilia retailer.  For example, say you see a signed Tiger Woods Masters Flag on eBay, and the eBay description says the eBay seller bought the Flag from Schwartz Sports.  Through online research, you will see that Tiger Woods only signs with Upper Deck, and thus the eBay item is fake.

Holograms is another example of a athlete/celebrity signing habit.  Some memorabilia retailers or even individual athlete/celebs use holograms to confirm the validity of a photograph, signature, or other sports memorabilia.  For example, Steiner Sports adds a hologram to each signed piece of memorabilia they sell.  Likewise, Drew Brees has his own personal player hologram that is added to each item Drew Brees signs.

Rule 3: Analyze the signature itself.

There are several ways to create a fake signature.  Knowing what to look for and how to look for the signature differences will help determine if a signature is real or fake.

Ask yourself these questions:

An “AUTOPEN” is a machine that writes autographs. It is made up of a fake hand and a real pen that write things automatically. Autopen machines vibrate when in use, causing the signature to appear shaky. Autopenned signatures usually come to a very abrupt start and stop. This is due to the fact that the machine places the pen straight down onto the item being signed, then lifts it straight up when the signature is finished. This also causes the lines of the signature to have the same thickness, unlike a true autograph.

JFK, Elvis Presley, Eisenhower, Babe Ruth, Mickey Mantle, and Walt Disney are just a few of the many known influential people to utilize secretaries and teammates to sign for them.  These types of signatures are known as “SECRETARIAL SIGNATURES” or “CLUBHOUSE” signatures.  These signatures usually occurred when the when a player is not around or does not want to be bothered, or a President sending out mass letters of condolences to families who lost loved ones in the war, and so forth.  The celebrity usually was well aware and even permitted fellow colleagues to sign their name for them.  For these types of signatures, it is best to seek professional opinion since it is a hand written signature.

“FACSIMILE” is when an item is most of the time stamped with what looks to be an authentic example of an original autograph.  If it is flat, then the “autograph” is likely to be a facsimile.  Alternatively, if you can feel the texture of the ink on top of the page, then you know that it has been added afterwards.  Keep in mind, this method will not work on fabric items such as signed jerseys.

Markers mask details so that major characteristics of most modern day autographs are lost. The features which make an individual’s autograph unique simply can’t be seen when thick markers are used.  In the past 30 years, it’s rare to find a celebrity who takes the time to actually write out a signature. Instead, celebrities often sign with a hurried scribble. Those indeed are autographs but hard to distinguish from other autographs. Al Pacino, a single squiggle. Kevin Kostner, two squiggles.  Vintage ink signatures, however, were signed with a fountain pen which required that the signer stop, use some kind of rigid backing, and with some care sign whatever was put before them. No on-the-run autographs were possible years ago. If the signer didn’t take care the ink would run or smear.

And that’s a wrap! Optimal Fundraising Group’s top 3 Rules to determine is a signature is real or fake autographed memorabilia!

One last thing to do! We posted on Facebook earlier today these two images and asked you to determine which signature was fake.  And the answer is….. 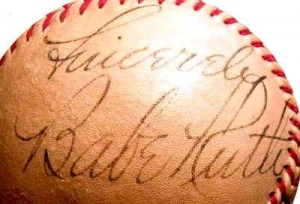 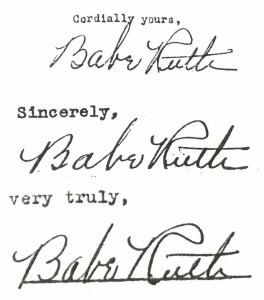 If you have any questions about Optimal Fundraising Group autographed memorabilia authentication process or any other questions please email us at socialmedia@optimalfundraisinggroup.com or just comment below!